Interview with Doug Aldrich from The Dead Daisies about Holy Ground promo, album details, live concerts, Doug’s career and so on…
David Aresté

M.S: Hi Doug, it’s a pleasure to have you here, we hope you’re well.

Yeah, pretty safe in my area were pretty quiet. There’s much going on around so we’re good. Thank you. I hope you are safe too. I know it’s in certain areas. It’s really still still going on pretty strong. But I hope that the numbers get better soon.

M.S: Since you’ve been in Dead Daisies, you release an album every year, except for this “The Holy Ground” which has taken two years… Is Dead Daisies the most active band you’ve ever been in?

I think so. Yeah because we’re always working on something. You know, we’re did I joined the band in 2016 we did Make some noise and then we could rise up in 2017 and then we toured and put out a live album 2018, I believe or maybe it was. Anyway, I got confused but we‘ve been doing albums every year and then two in 2018. Then John Korabi decided to focus on his solo stuff. Basically These acoustic live stuff. We sorry that he was going to do that, but we’re excited for him and excited for what the future would hold and then we get together with Glenn and it’s just been amazing.

So we immediately started… David and I started writing a little bit. But then when Glenn got in the band , he had a bunch of songs already he wanted to present to the band. We started writing directly with Glenn and me. And so we did the end of 2019 Holy Ground we had to wait to release it. I couldn’t leave it last year because we just knew if there was going to be no touring at all. This year we’re hopeful that we’ll be able to come over to Spain and other parts of Europe mainly later this year. 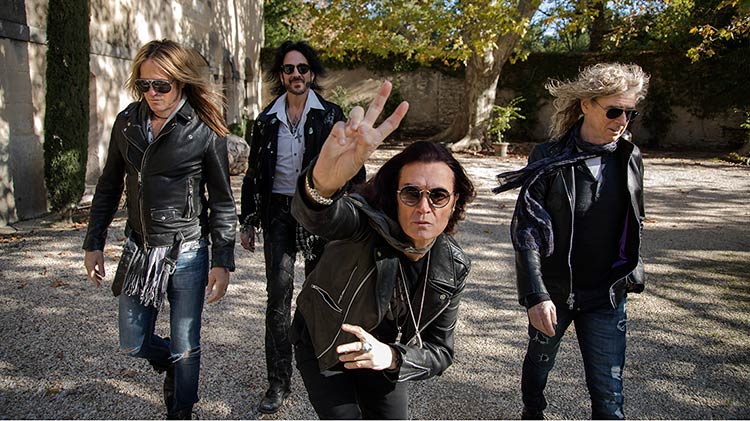 M.S: In fact Glenn Hughes announced at Neil Jones Rock that he already has songs for an upcoming album, have you thought about a date to record again? Or it’s maybe too soon?

Glenn worked on some songs and there it’s really cool but it’s not a plan right now to record. We really want to focus on Holy Ground to, you know, we really want to focus on promoting Holy Ground and basically getting out live soon as we possibly can, and as far as We’re recording will see you know, I mean You never know what happens in the future, right? We didn’t know that we were going to have a pandemic. Yeah, it happened happens. And so we’ll see what happens. But I’m hoping that we could play Live sooner than later like this year. We really… I think we all need music, you know, we need like music

That might be correct. So in that situation, we would definitely be ready by that point to come play for you guys. I forgot about there was a tour that got pushed back till 22, but you never know what happens we might… there might be a festival or something that pops up later in here. Who knows? I’m hopeful I mean we love our Spanish fans, Spain is kind of one of the coolest places in the world to play. And some of the greatest cities in Europe obviously, you know, we love it there and can’t wait to come back.

M.S.: The first time with Tommy, your new drummer, who suggested his name for the band?

He is been in the band touring in 2015. He was on the short list and turns out he was available and I’m sure we’re so excited about it because he’s a monster player super cool guy, but he’s probably the heaviest drummer out right now. He’s definitely gonna bring a heaviest this band of We haven’t had before 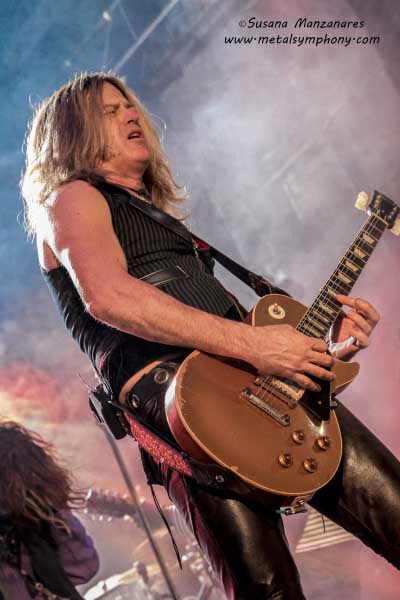 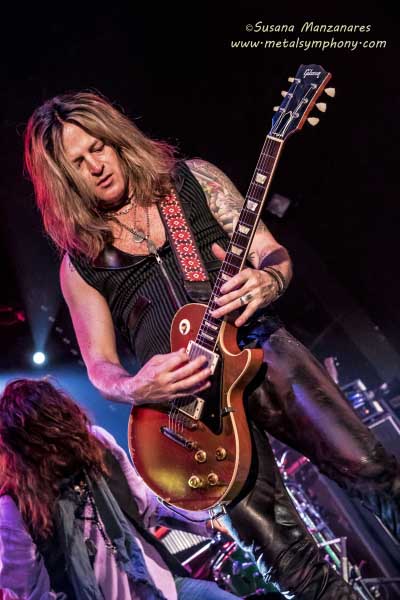 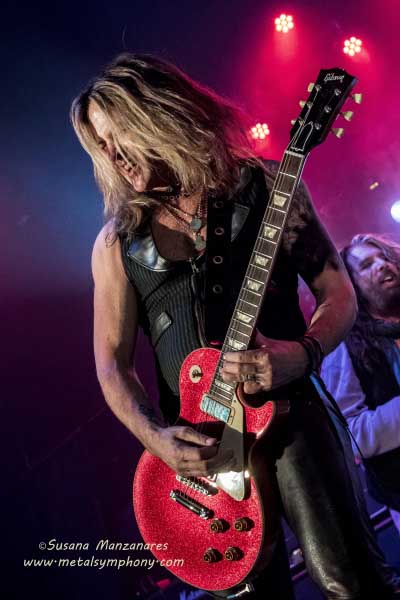 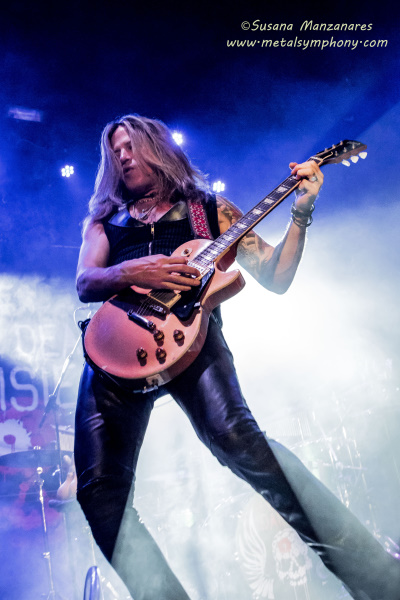 M.S: As I said, you have 6 studio albums in 8 years … What do we have in this Holy Ground that we don’t have in the others?

It’s more melodic. I think it’s a little heavier. Maybe it’s to groovier. Lyrically, it’s definitely you know, a deep lyric content on this album. I love that about Glenn’s lyrics, he leaves room for the interpretation so you can make the song your own. You know, I love that

M.S: But your guitars are more…. Like you said, more grooving, isn’t it?

Well, I mean, it’s me playing my same sound, I know he likes to heavy groove type thing and then the songs that Glenn brought in kind of groovy songs to and so it was just a matter of playing in my normal style, but it’s the way that we wrote those songs 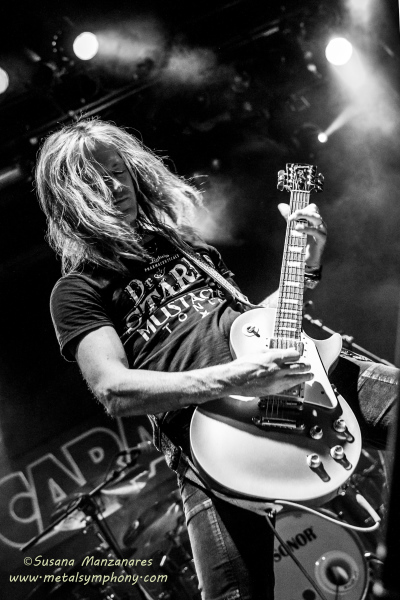 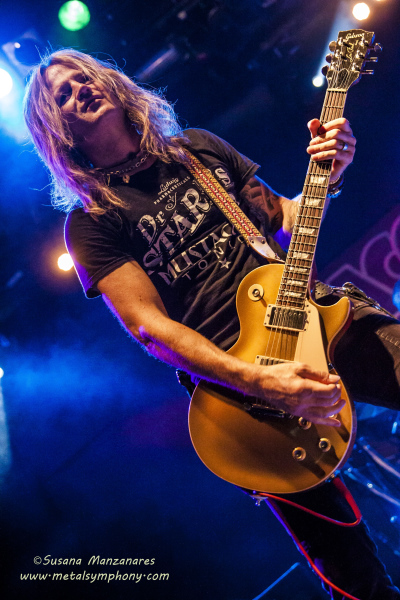 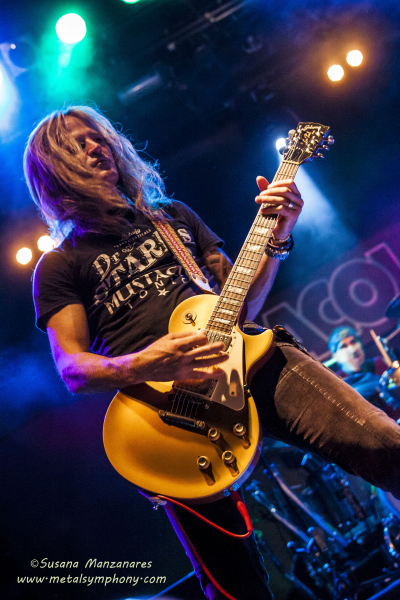 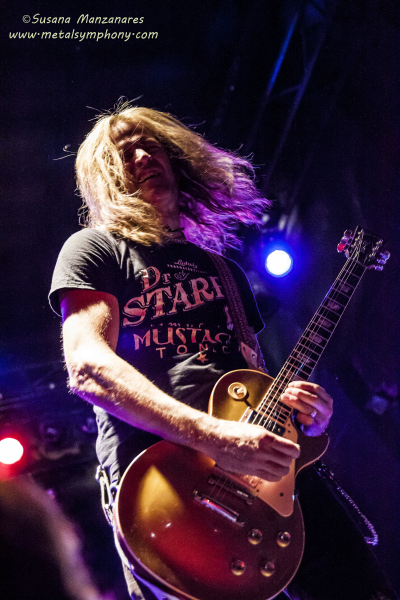 M.S: How has the guitar work been for this album?

I think it’s a little bit less, you know about technique more about the vibe in the song, this album is definitely each song as a certain vibe to it. And so I just wanted to play for the song. It’s kind of a less-is-more type of guitar record less shredding more Melody.

M.S: You have always worked with great voices like DIO, Coverdale, Corabi and now it is the turn of the immortal Glenn Hughes, what is it like working with a legend like him?

he’s just brilliant, you know, he’s legendary for good reason because he’s brilliant musician very spiritual man. He writes from his heart and he brings Aside from his songwriting is voice. His bass playing is incredible. It’s just such a melodic player. he loves to go for it. You know, like how people like Jack Bruce or John Entwistle. He’s like that kind of a movement player and heavy groove.

M.S: We understand that we will see these songs live on the tour in 2022 or could you do some kind of online event to see in live? Do you think about it?

We did, we have thought about it, we’re not sure if we’re gonna do that, if we’ve got dates that are coming out we probably won’t do it, but if we don’t get to play live I think we will do it because it’s just a little difficult because we don’t all David’s in Australia the moment so we’re still a little hard to travel but now Glenn,Tommy and I are here so we can just all we have to do is get dated 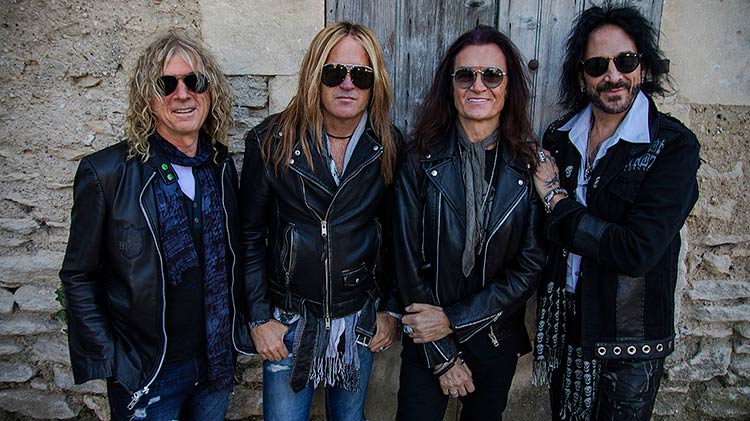 M.S.: In 1994 you started releasing solo albums but in 2001 you stopped, haven’t you ever wanted to compose again?

I have, but I never really had the time to do it. During the time of joining DIO I was busy recording and touring and I went directly into Whitesnake it was only going to be for two months but it turned into over 10 years, 12 years almost and then I by that time I had children at home so I needed to you know take time away from Whitesnake to take care of my son It was great that I was able to do that.

So I I’ve written some things but I haven’t really had an opportunity and then I was working in. I had a gig in Vegas for a little while and is fun so I could be at home with my son and but then Glenn call me to go on the road again and time just flies man, maybe in the future one day but right now Holy Ground feels like Got my heart, you know, I need to focus on that.

M.S: We saw you with Burning Rain in the last Monsters of Rock Cruise, what do you remember from the concert?

It was fun, I’ve never been on Monsters of Rock Cruise before, a lot of friends, a big party. It was the last big party before the pandemic, you know? I had a great time playing, that Burning Rain thing was something that I had for a while, but I would be work with DIO, Whitesnake, The Dead Daisies. And so I have one more album to fulfill for burning rain and we did that for Frontiers.

I think right now my 100% focus is Holy Ground and you know, see what see what happens in the future, but for now Glenn and I definitely are committed to not doing other projects

M.S: Then it may be a possibility will be another Burning Rain album someday?

Yeah, maybe really at some point. I’m sure there’ll be something more and who knows maybe I will got music for solo stuff. But these albums that we weren’t really well-known, the solo albums. I don’t know what you have. You have two solo albums of mine? 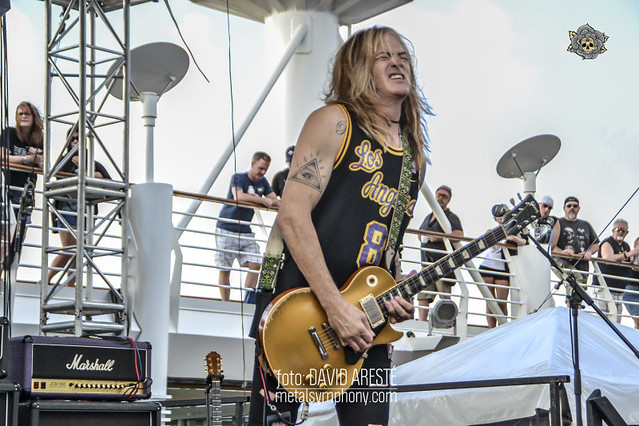 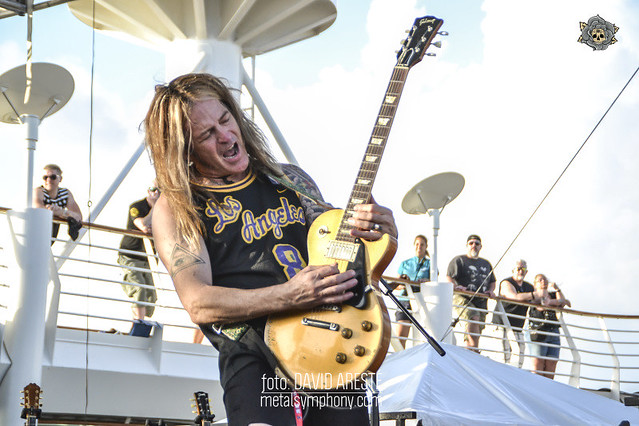 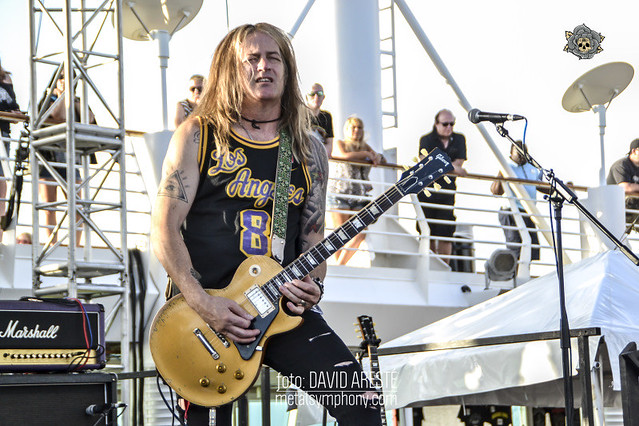 Actually that’s you’re not very well-known. People don’t know about them, I might re-record a couple of those songs as well. Get them up to date, you know.

But like I said right now I really you know, I’m so happy with how we’ve been really happy with the results on Holy Ground and the response has been Extraordinary really grateful for it so we’re doing promo right now and as you mentioned Glenn and I’ve already worked on some new music David’s got some new music he’s been working on… so we’ll see about that but we’re going to get in rehearsal later this year and get prepared for when we can tour, that’s important…

M.S: We end with our guitarists question… as a curiosity, Do you know how many guitars do you have?

75 guitars, give or take one or two. But yeah, I have a lot of guitars everywhere I even. Got some guitars that I’ve loaned to friends and I’ve got a bunch of guitars in storage. I’m actually re-modeling. I’m at the end of a remodel of my entire house. So I took all my guitars and put them in storage except for probably about 15 that are in my studio that I use and some you know, some of the more vintage ones but yeah

I’m very lucky to have so many I probably should get rid of some because you can’t play say 5 guitars, or even 50 guitars.

It’s just an addiction. I mean, it’s hard to find something you fall in love with it. I bought a bought a 68 Gibson Les Paul last year.That’s kind of expensive and my wife is always ask me. How come we don’t have enough money? You know , and I’m like, it’s my fault. 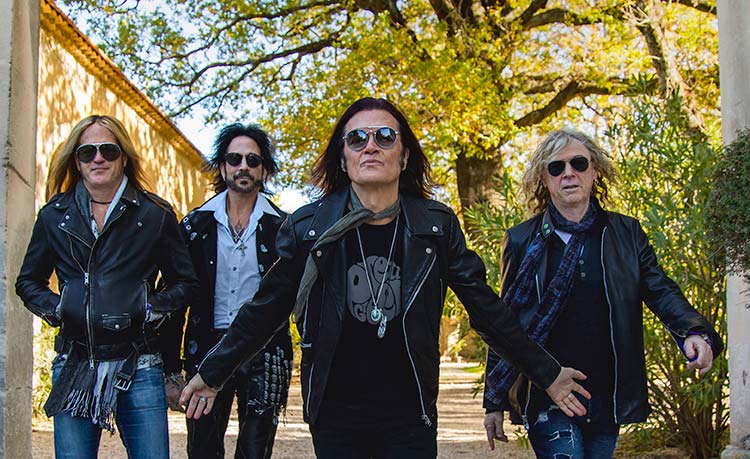 M.S: Thank you for your time, it is time for you to say goodbye to your Spanish fans. Good luck with the new album and take good care of you.

You take care David! Thank you so much for what you do and I appreciate your support and look forward to coming back to Spain as soon as possible.

M.S: Thanks for your time