Frontiers Music continues to bet on a lot of proposals so far in 2021, one of them was the debut of ScreaMachine that we already talked about a few days ago. It is the turn to speak with Francesco Bucci, bassist and founder of the band so that he will introduce himself to our readers and tell us about that album among many other things …

We’re hot and ready to take the world by storm, thank you!

Here in Italy the situation is still very serious, but it seems to see a light at the end of the tunnel. Let’s hope for the best.

M.S: To get to know the band a little more, tell us how the idea of creating the band , your musical style, etc…

ScreaMachine is born from an idea of mine back in November 2017.

You have to know that I’ve been playing the bass in the italian extreme Epic Metal band Stormlord since 1998, and I’ve dedicated them most of my crativity and energy for the past 25 years, recording albums that still makes me proud.

At a certain point of my life, I felt the urge to connect back with the influences that introduced me to the heavy metal music when I was a child, like Judas Priuest, Accept, but also Exciter, Saxon, Warlord etc., and this urge has become a band named ScreaMachine.

I was so lucky in finding i no times such great bandmates like Alex Mele and Paolo Campitelli from Kaledon, a respected power metal band from Italy active since 1998, Alfonso “F” Corace, involved in more heavy projects like Airlines of Terror, and my great friend Valerio “The Brave” Caricchio, that have always been very active in the scene here in Rome and that, in my opinion, is an hell of a fromtman that the world needs to discover as soon as possible.

The most important thing, for me, is that ScreaMachine should not sound like a tribute band mocking the past, with vintage productions and copycat songs.

ScreaMachine is born from the love for the heavy metal gods, but we want to bring this sound in the new millennium remaining loyaly to our roots but, at the same times, taking advantage of the modern tecnology.

I mean, for example, that we record with a modern production with loud guitars and thundering drums, not trying to sound like a NWOBHM LP back in 1982. We already have many masterpiece from those years.

Also talking about the music, of course we’ve our style and our inspirations, but there’s nothing sacred. Every new influence is welcome, as long as our sound remain loyal to the ScreaMachine concept.

Like I said, for ScreaMachine my main influences are the big names of the past like Judas Priest, early Metallica, Maiden, Savatage etc, but if you talk about Francesco Bucci, there’s a shitload of other music to care about.

Keep in mind that I’m not a teenager anymore, so it’s my tastes in music are various and range to electronic music to reggae, from roots blues to raw black metal, because they reflects the experiences I had in my life.

I started listening to HM in the early ‘90’s with “Kill em All” by Metallica, but soon I went crazy about the rising extreme metal music scene. Those were the years of American and European Death Metal masterpieces, I’m thinking about Morbid Angel, Deicide, Dismember, Bolt Thrower and so on, and of the second wave of black metal with bands like Immortal, Darkthrone, Dissection, Mayhem, Burzum, Summoning, that I love so much.

I can’t forget that I spent over 25 years of my “carreer” in Stormlord, that has a strong relationship with black metal.

On the other hand I’m bass player and I love this instrument so much, so I’m very interested in ‘60 jazz, fusion, sould, 70’s funk and so on.

Right now I try to think only in terms of good music and bad music.

M.S: Steve Digiorgio has collaborated on your album … Why did you think of him as a guest on the album? How has it been working with him?

Absolutely stunning, he’s a real gentleman and his performance on the album is a dream come true form me, grow up with his albums with Death and Sadus.

The idea came after a chat with Elio from Frontiers about our song “Wisdom of the Ages”, the most obscure and atmospheric one on the album.

He thought that some guests could spice up even more the whole song and he asked me about some names I had in mind.

As a bass player, one of my dreams would be to play a duet with Steve di Giorgio, so Frontiers was able to introduce me to the legend himself.

He was so down to earth and and we exchanged some nice mails. He was interested in the song and, most important thing, he was surprised about the nature of the performance requested, since in most of the bands were he is involved he have to show his virtuoso style.

Instead, I was searching for an arrangement that could focus on elegance and on the sound of his fretless bass. Of course, I left him free to do everything he wanted, but in the end I think that he perfectly captured the spirit of the song, like you can hear with your own ears. 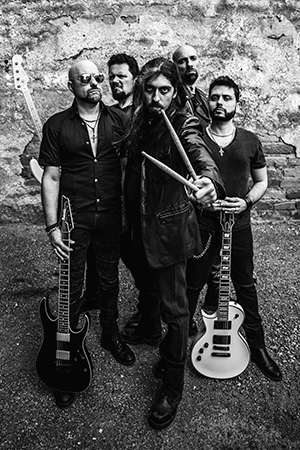 M.S: This album is released through Frontiers Music, we imagine that you are happy working with FM, right?

How could I not be happy? Frontiers Music is one of the most interesting and respected label on the scene, they go most of the big names of hard rock, despite this they still have the balls to bet on new bands like ScreaMachine and I thanks them so much for this chance.

The way they promote the album and support the band is so professional and dedicated that I can’t imagine a better label for us right now.

M.S:Who has done the cover? is VERY powerful ..

I discovered his art because he made the cover for the second album of Lahmia, an italian death metal band we are very good friends with.

In the beginning it was not easy to make him understand the concept of ScreaMachine, since we were trying to play with the cliché of HM, especially flames, monsters, pieces of metal and so on, without acting like a parody or grotesque, while he was more towards an “artitics” and surreal style.

After a few reviews of his work, he choose to push the pedal to the metal and so this amazing cover was born.

It was only necessary, for us, to shout “MORE FLAMES, MORE METAL” two or three times in a row to let him fully understand what we were searching for…

Sure, the lockdown and the pandemic were not able to stop us since we’ve a good relationship with technology and we are used to share our idea/demos through the net without problem.

After the mix of the debut album was done, we started spontaneously to exchange some new songs and right now we’ve a big part of the songwriting ready for the second album, even if I’m talking about raw songs that could change drastically when it comes to the arranging process.

Anyway, since we can’t jump on the stage yet, we’re working to feed the ScreaMachine with some loud heavy metal music!

We have released already two killer videoclips for the songs “Demondome” and “The Metal Monster”, directed by Kinorama Studio, and a live-in-studio cover version of Judas Priest’s “Leather Rebel”, that you can find on our youtube channel, so we think we’re done with this stuff so far.

We’re not oriented towards some live streaming because I think that this solutions fits more to bigger bands with a wider audience, that could play a strange set list or have a surprising stage to show.

ScreaMachine has to built its street credibility on a real stage, with blood, sweat and a real crowd to win.

Since this is not possibile right now, we prefer to work on new music in order to creat a wider connetcion with our listeners as soon as possible.

Anyway, as soon as it will be possible to play a safe live show, we’ll be there!

M.S: The album came out a few weeks ago, what feedback do you get from the press and your fans?

We, the album came out just three weeks ago so it’s till early to judge the whole feedback but I’m not afraid to say that, so far, the response was HUGE.

I’l be onest, this is a work of pure passion, it’s the album we wanted to hear and we created it just thinking about our love for this music, so I was not sure about how the people could react to a simple and hones heavy metal album in 2021, where most of the new bands use more than five adjectives to descrive their music.

Seems to me that I was wrong, since most of the reviews are damn good and, most important thing, our social profiles are now visited with a lot of people that show us thier love for taking back this simple, but yet immortal formula mand of riff, shouted refrains and soaring guitar solos.
So, maybe, we were nto the only one interested in listening to an straight-in-your-face heavy metal album! 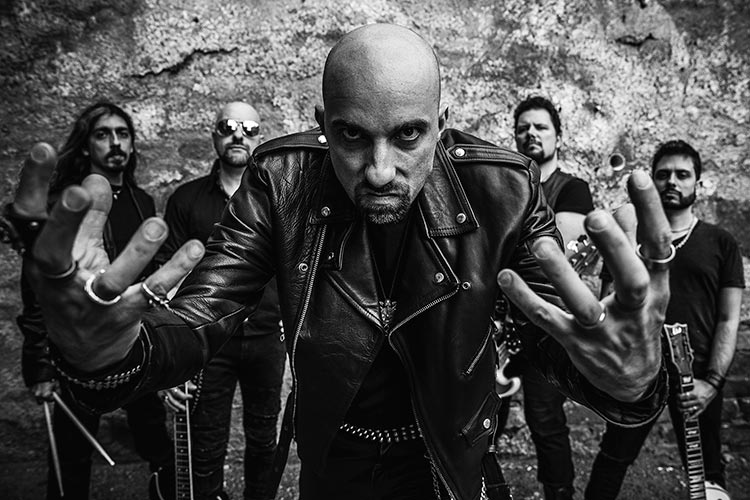 M.S: Thanks for everything, if you want to leave a last message for your followers, this is the moment … good luck with this new album.

Thank you very much for having ScreaMachine here.

I hope that your listeners will support our music, because there’s a big need to bang our heads with a shot of pure Loud Heavy Metal Music in these dark times.

You can discover everything about ScreaMachine following these links: